Please note we are now closed for mail order meats for 2018. Any orders received after Sunday 16th Dec will be processed in January 2019. Our meats are still available for collection at Farmers’ Markets this Sat 22nd December in both Edinburgh and Haddington and in our farmshop until Sunday 23rd December. Come along and join us for our Summer Session!

We are running a number of exciting activities on the Carmichael Estate near Lanark.  These sessions are suitable for 5-12 year olds.

We will be introducing our new Loose Parts sessions where children will get the opportunity to build, chop, saw and construct using a wide range of junk materials in our beautiful outdoor woodland setting.

All sessions will be rounded up with fire drinks and snacks and lots of forest school play.

In the year 1058 Queen Margaret established an early Christian church dedicated to the Archangel Saint Michel on a hill “caer” site in Clydesdale and within 200 years the people of our district became “Caer-michels” or “de Carmichael”.

My family have been established here since 1292 and probably earlier. After the Independence struggle we were rewarded by King Robert The Bruce, through The Good Sir James Douglas for services at Bannockburn with a Barony land grant, and I remain today the 26th Baron of those lands and indeed 30th Chief of the name. Throughout history the Baron kept the king’s peace in the district and looked after the people of the district, including ensuring there was water in their wells and food in winter with fresh meat from his dovecot. 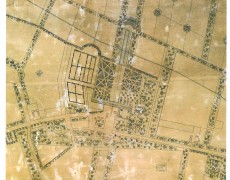 In 1750 The Third Earl of Hyndford was ambassador to Prussia for King George and Great Britain and invested considerable sums in landscaping the Policies at the core of the Barony ancient lands. As can be seen on the attached 18th Century plan this project included Bannockburn “shiltron” roundels and Union Jack ditches and plantations to represent both sides of our Scotland origin and UK present reality. This certainly demonstrates that he was a great diplomat in a debate that is current today.

In 1944 The British Parliament passed The Rural Water Supplies & Sewerage Act, which provided Councils with public funds for improving rural water supplies for schools and community, and in 1957 my Cousin, the 25th Baron, sold “in consideration of the price of One Pound Sterling” various sites including a 121 sq m tank site, within the landscaped Policy boundaries and yards from the westernmost shiltron roundels. The disposition was “in favour of the said The County Council of the County of Lanark and their successors as such authority according to the true intent and meaning of the said Act and to their assignees whomsoever heritably and irredeemably”. There was no provision in either the 1944 Act or the 1957 disposition for redundant sites to be returned to original owners. However it is probable that “the true intent and meaning” of the 1944 Act, in persuading the historic land proprietor to part with a number of sites for a pound, anticipated the sit 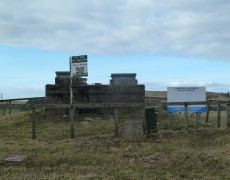 es would be restored and returned when no longer required. Throughout my 35 years at Carmichael the tank site known as the Carmichael Crossridge Service Reservoir has been in constant use for farms and houses at Crossridge, Newside and Bowhouse. Indeed until recently water board employees regularly visited my office and even in early 2015 the community thought the tank was still in use and it is clearly still signed as such. The boundary fence is broken and various metal hatches and pipes litter the farm ground outside the site. Clearly no attempt at cleaning up the site ready for sale has been made.

On 25 February Scottish Water as successors to Lanark County Council and West of Scotland Water sold the tank site at SVA Auctions in Edinburgh for £2100 as lot 30. Although I am a client at SVA Auctions, and although Scottish Water are familiar with my office and ownership of the ground that surrounds the tank site, no attempt was made to inform me or anyone in the district of the proposed sale. As can be seen in this picture a small SVA auction sale sign was placed on the site, which is barely visible or readable from the public road, and was not spotted even by neighbours who pass every day, until March 8th. This being the date I first became aware of the sale, although adverts were apparently placed in newspapers as far away as John O Groats around February 17th, no press advert was placed in our local Lanark Gazette or The Glasgow Herald, the newspapers read by most people in our district.

Last year Clan Carmichael celebrated the 700 anniversary of the battle of Bannockburn with some 45 clan members from six different countries returning to their clan lands for Homecoming 2014. The attached pictures were taken with, then First Minister, Alec Salmond at Bannockburn field. The realisation that there would have been no Clan lands at the source of our name without the Barony grant after that battle, was sufficient incentive to bring the descendants of our forefathers home from as far away as New Zealand. 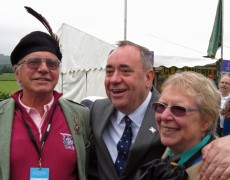 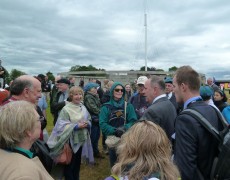 I had asked Scottish Water to reconsider their sale of this lot before
completion, to the as yet still unknown purchaser, but was advised in a letter dated 23 March by Tom Axford, Head of Legal, that it could not be stopped as a binding contract is in place between Scottish Water and the purchaser.

Since the 1944 Act, watersupplies have been devolved to the Scottish Parliament and the Scottish Ministers, and if this sale is truly in the national interest I would be very surprised.  It is an injustice and an affront to our global Clan Carmichael heritage. It is an insult and a demonstration of gross ingratitude for the services provided by successive Carmichael Barons to improve water for our rural community, and is against everything the current SNP government has striven to achieve since gaining power at Holyrood in 2007. It demonstrates a disregard for our heritage landscape and sets an appalling precedent for government supported injustice by ignoring the “true meaning” of the 1944 Act.

Want a special cut of venison, beef or lamb or just your normal weekly shop – remember that you can order online for collection at any of the Farmers Markets that we attend.  Also to avoid disappointment orders can be placed online for collection at the Farm Shop here at Carmichael, then you can enjoy your drive in the countryside knowing that your order will be waiting for you when you arrive.  Alternatively we can send your order out on an agreed date for you to receive by next day courier delivery.  We look forward to seeing you soon.

Delicious Carmichael Estate Farm Meats, including our award winning venison, beef and lamb are available for order on our website. The last day for sending out mail order deliveries for Christmas and New Year, i.e. deliveries between Monday 21st and Tuesday 12th January has now closed. Orders can also be placed via the website for collection at Glasgow Farmers’ market taking place on Wednesday 23rd December until Sunday 20th December. Please telephone 01899308336 for meats with limited availability.

We also have a wide range of Clan Carmichael crested gifts that can be ordered and shipped almost anywhere in the world.

Have a great festive season everyone!

For those of you that haven’t heard of Brit Stops it is a scheme whereby if you own a camper van and you purchase a book from Brit Stops you can then gain pre-agreed access to a whole world of great places to park your van overnight. We have been a Brit Stops site here at Carmichael for several years now and we have had some amazing customers in our farm shop & tearoom car park for overnighters.

For more information try looking at the Brit Stops website

Just had some feedback today from some lovely Brit Stops customers that we thought we’d share. Haste ye Back!

Yes the modern world has arrived at Carmichael Estate and by the 15th of June 2014 we should have all 16 cottages wifi enabled for free to use web browsing during your stay.

A few years ago BT told us that there was no way we would ever have broadband in the cottages as we were too far away from the exchange and for many years we ran the Estate office on satelite broadband which was expensive slow and unreliable. We are now really pleased to be able to offer Wifi internet across all cottages although as we at the mercy of the telecommunications powers that be we unfortunately can’t guarantee it will always be available.

Free Wifi for all! We also have free Wifi available in the shop and tearoom from 10am to 5pm each day.

The latest in a series of  International Carmichael gatherings – each organised by Chief Richard and his family since 1983 – will be held at Carmichael Scotland in late June and early July 2014. Previous gatherings have been held at the rate of three a decade and this year’s event will be the second hosted by Chief Richard with son Andrew and grandsons Fraser & Aidan in support.

The theme this year will be to celebrate the second Great Scottish Homecoming Year (the first was in 2009) and the 700th anniversary of the battle of Bannockburn, which led to the creation of the Barony of Carmichael. The Scottish victory in this battle confirmed the Independent Nation of Scotland and the supportive families and clans were rewarded with land grants. Sir James Douglas was King Robert The Bruce’s right hand and the Carmichaels were kinsmen and neighbours in Douglasdale, and as such instrumental in the victory. If this battle had been lost we would not be here now and the origins of the Carmichael name would also have been lost!  This is a unique historical opportunity to celebrate in style.

We are in the process of planning the final detail of this exciting and unique Clan Experience. Tout Jour Prest!

This year the Carmichael Estate once again hosted one of the countries largest gatherings of Hungarian Vizsla Dogs. The owners who came to Scotland Mega Whizz 2014 stayed in the self catering holiday cottages in tranquil surroundings of the Carmichael Estate and enjoyed a weekend of doggie catch ups, pub meals, quizzes and of course a long communal walk through the Estate before devouring a delicious Carmichael Meats BBQ.

This years event boasted 140 dogs on the walk and we served a BBQ to 205 people on Sunday afternoon which included lamb, beef and venison from the farm shop. 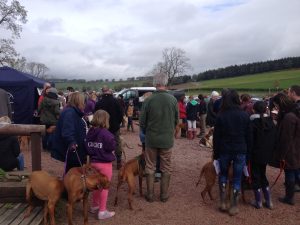 Next years Vizz Whizz is already booked in and we are looking forward to it already.

If you are thinking of organizing a large event and need a venue with on site catering, accommodation in a relaxed rural environment please get in touch.

We use cookies to ensure that we give you the best experience on our website. If you continue to use this site we will assume that you are happy with it.OkRead more